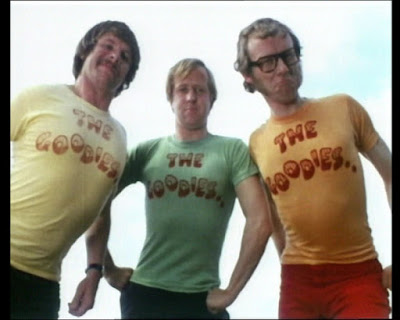 This page has been created because.. (if your a member of the Goodies fan community aka The Goodies Rule Ok Fan Site or The Saucy
Gibbon Forum, you will be well aware of the tale).

..For those who are not so familiar.  Here goes...


The Goodies is a fantastic comedy created by and featured
Tim Brooke-Taylor, Graeme Garden and Bill Oddie.  That ran from 1970 to 1982. And had 9 series.

During this period it had well over a million viewers.

They were repeated on Gold for a time in the 1990's. But on the BBC there has been no regular repeat of the series, (except for a show of Winter Olympics in 2006 and The return of The Goodies, anniversary special a year previously) until 2010.

In 2010 it was the 40th Anniversary of The Goodies.  In around October time of that year a Goodies fan appeared on points of View and asked if the BBC were going to celebrate this Anniversary in anyway with some repeats or a special.  But the Head of Light Entertainment, responded with a sniffy remark of NO.
The reason was something to do with being too nostalgic.

This angered Goodies fans, and everyone wrote in their dismay and demanded the BBC to repeat The Goodies.

Then over that Christmas, six episodes were shown on BBC Two (late at night).  These got huge ratings, over 1 million.  After large viewing figures such as these you'd think they might continue to show repeats?

But no couple of years later I went to An Audience with Tim Brooke-Taylor and this was mentioned and someone asked what the reason was for not showing anymore and the answer seemed to be because the viewing figures weren't high enough.  "I hear you totting” This was the same answer as last time after the Winter Olympics repeat.

The excuses from the BBC for not showing repeats have been varied. From the above and because they went over to LWT/ITV. (Morecombe and Wise went from LWT to the BBC and back to LWT)  And the BBC still repeat M&W at Christmas and various times of the year.

From the interviews I've seen and read.  The decision to go to the LWT wasn't really there preferred choice.  When it came to the end of the last series on BBC TWO, the beeb weren't so keen to give the chaps another series as they were more interested to see how Hitchhikers Guide to the Galaxy did, which was a new show at the time.  And during this time Tim, Graeme and Bill got a call from LWT.  But Tim wanted to wait.  (So they were in limbo at this time.)  And ultimately 'Hitchhikers' did well and The Goodies got a new series on LWT.

So it was never really "their fault" for going to LWT.

There have been many petitions to get the show repeated and released on DVD.  Including one setup in 2007 by Giddies, Jess Pickles, Kirstyn Smith, Jodie Van De Wetering and Peej Harding.  And for The Goodies DVD by Jeff and Jane Walker, which did seem to be a success.  This was also launched in 2010 and a new DVD seemed to appear on the 8th November 2010.

The very last repeat of the Goodies on the BBC was last year, spring 2014.  BBC TWO turned 50 and repeated many other comedies including Kitten Kong.

All this has been going on for 30 years now.

And all Goodies fans and comedy lovers want to do is just sit, watch and enjoy the wacky trio in all their wonderful side splitting episodes.

What I have done here is. I have produced a survey of seven simple questions for you answer.  And when there are a significant number of responses, I will send this in to the BBC and UKTV GOLD or any television station that gets suggested.

This is more targeted at viewers in the UK.  But if you are from abroad feel free to take part anyway. :-)


So if you are sick and tired of the BBC, GOLD (or other.)  Of not repeating The Goodies and not releasing more DVDs, then fill in the survey.  The results will be posted on the RESULTS page. (As often as I can manage).  Also you can leave your views on the matter here, at the bottom in the comments section.


This survey is a permanent place to voice your views on the matter. And one day (hopefully) will help get the Goodies on tv again smile emoticon

The results will be posted here as the numbers progress.

For more Goodies fun you can head over to The Goodies Rule Ok Fan site and Saucy Gibbon Forum.